SEE KYIV’s selection of the musical highlights of 2021 – a year defined by collabs and the return of live concerts to Kyiv. Listen to selections from this article on playlists:

WEAR YOUR HEART ON YOUR SLEEVE Kyiv stalwarts Vagonovozhatye have produced an album with an undefinable mix of styles: electronic beats, live drums, electric guitar, and spoken-word vocals. Anton Slepakov, the band’s dazzling lyricist packs his verses with metaphorical poetry and wordplay about Kyiv, encouraging you to dive into a mosh pit while pondering the city’s traumas. Intense, haunting hip hop tracks blended with synthwave and ambient sounds that are themed around lucid dreams and grotesque events. The second solo album of Yevhen Volodchenko aka Kurgan is rendered in Surzhyk, creating a feeling of intense authenticity. A documentary-like study of an indie artist’s life – with all its anxieties and aspirations – O_x is the latest solo album of former Yuko member, Stas Koroliov. Guitar and electronic beats accent a record bursting with thrilling experimentalism and humour. When performed live, the record resembles a deeply personal theatrical production: drawing attention, in almost forensic detail, to Koroliov’s loss of his eye; the collaborative energy of music writing; and the collision of art and politics. Singer-songwriter and creator of the most touching song dedicated to the streets of Kyiv, Kostyantyn Poshtar aka Postman entices listeners into a soundscape inspired by the 1990s, Britpop and indie folk. Welcoming and personal, it is laced with sensitivity and the daily frustrations with society. “Where I was born, barbarians burn forests and paint curbs” he chants in an acoustic confession. Comic geniuses and writers of hip hop party bangers, Kurgan & Agregat in collaboration with producer Serhiy ‘Syr’ Soroka have created a new, sophisticated sound of swing, ‘70s funk, disco and jazz. An album that sets your foot tapping and body swaying means only one thing: the collective has found “the 13th talisman of rap” that helped them to become “the kings of music and lords of ad-libs”. Hero of the mid-2000s Kyiv’s punk rock scene, Chemerov, who had moved to Los Angeles to form the rock band, The Gitas, returned to Kyiv midway through the pandemic to give the city a sample of his talent from a new angle. A stunning collection of open-hearted pop singles with a touch of soul music, it is accompanied by a gospel choir complementing his raspy vocals. Saving our mental health once again, Grisley Faye and Blooms Corda has produced a perfect collaboration, featuring twee, fuzzy guitars and synths: truly a match made in heaven. ‘De Ty Ya” is an invitation to strut and sashay around the city, day and night, wearing your prettiest dress and shoes. A bite-sized musical snack to tie fans over until their next album, Latexfauna have brought a funk about a tropical holiday resembling a commercial for the Bounty chocolate bars – one of the first foreign ads to grace Ukrainian television screens in the early 2000s. A hyper-pop project or a meta joke? Thekomakoma’s debut EP draws connections between cheesy Ukrainian trash pop and the spirit of “new sincerity”. Themed around the youth moving to the capital to party and occasionally study, Thekomakoma liberally mixes irony with sincerity to the point it is hard to separate the two. Over-the-top production values, expensive videos, and ideal make-up for the front singer, Yulia Sanina – an album of perfectionism. Such hard work has paid off, generating a huge fan base and concerts at Olympic Stadium in Kyiv. A collection of monumental arena-ready pop songs about love, nature, and female empowerment, The Hardkiss’s latest tracks have epic vocals, heavy electric guitars and millions of views on YouTube. Every shot of ONUKA’s captivating music video for GUMA is an ode to Kyiv’s breathtaking architecture. With imagery of  the Polytechnic Institute, Vernadsky National Library Of Ukraine, and the Palace of Children and Youth, the video is dedicated to the disabled and blind. An intriguing fusion of languages, instruments, and styles, Alyona Alyona’s Galas LP consists of collabs with artists from across the globe. Not afraid to speak her mind, Mariya Tuchka aka Tucha blends cold, distant beats and fierce singing about the daily dramas of young women – all the while being covered in Britney-inspired glitter. The debut album of Kyiv-based duo Rayok is a compilation of catchy indie-pop with angelic-sounding but macabre vocals about dopamine-addicted vampires and choruses like “all your friends are dead, now, there’s only me”. Hypnotising tracks built around acoustic guitars and drums that set you in a dreamy mood are the latest creation of Lyiv-based Odyn v Kanoe. With their soul-reaching vocals, they talk about melancholy and sorrow. The post-rock guitar solo on Huang He is an apocalyptic and heart-lunging creation. Following his comeback in 2020, VovaZiLvova has released plenty of radio-friendly hip hop singles; each of them with their own unique vibe: a rap about females in Ukrainian IT industry; a gospel choir-heavy track with witty political commentary; and even a touching song fit for weddings. Most stylish of all is a pared-down track called Tantsi Zamist Tserkvy, created in collaboration with Zbaraski.

After a long pause in their music career, indie-pop duo Zapaska have returned to produce Hoiya, a creation filmed in a semi-ruined medieval tower in Khmelnytskyi Oblast.

Layah is teasing us with an astounding and dark single inspired by 1997’s ‘Lost Highway’, and we hope it means more music next year.

2021 began with the release of Shum by Go-A, a creation that emerged during the Eurovision contest. Coming out of virtually nowhere, the ancient folk song about spring mixed with electronic music that proved to be so immeasurably popular and a quintessential overnight hit.

“The youth set a police van on fire!” – Avtozak by Zhadan i Sobaky is unquestionably the song that must be on the playlists of future protesters in Ukraine.

The debut video Letopis by Kniaz Volodymyr, an emerging talent of Kyiv’s hip hop scene, was shot with a 360-degree camera in summer. The rapper moves around the empty streets on rollers through Klovskyi descent, the Presidential Administration building and into more comfortable settings, like the seats on his very own balcony.

In 2021, the cultural agency Kontrabass Promo released ZMOVA project, 4 conceptual concert videos shot in Kyiv, designed to draw attention to the city’s historical sites. Performances by Kurgan take place at Vernadsky National Library of Ukraine; Hyphen Dash in the National Art Museum; and Ragapop at the National Cinematheque of Ukraine, and The Unsleeping at the Countess Uvarova Mansion. 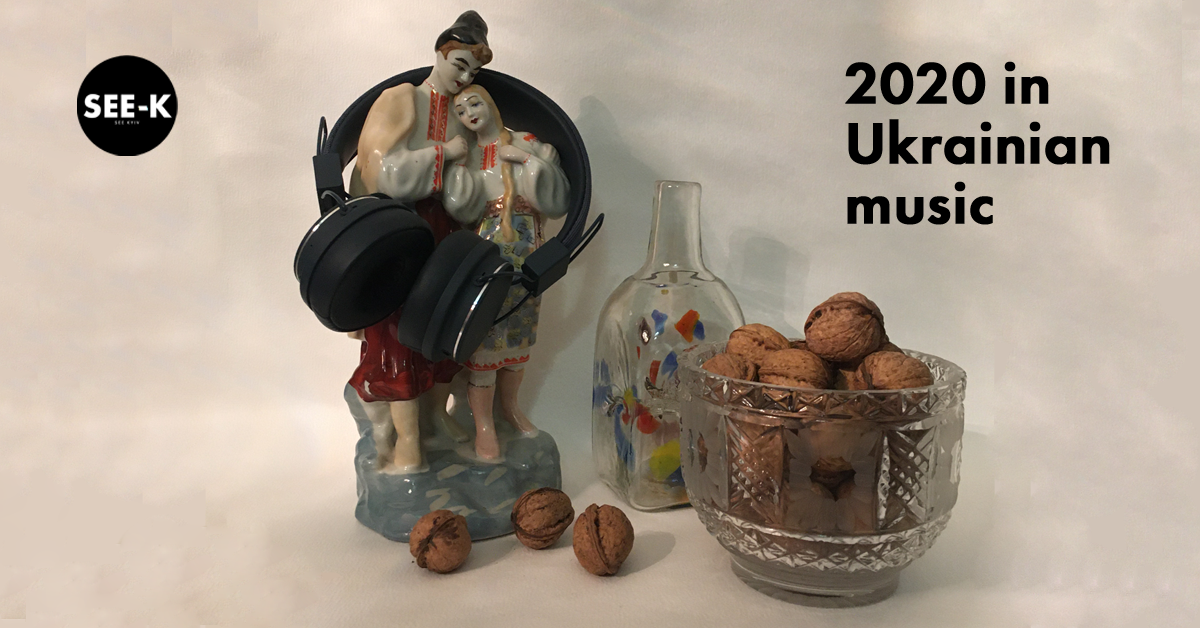